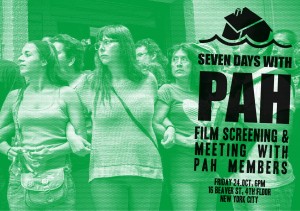 »Sí se puede. Seven days with PAH Barcelona‘ is a daily account of the Platform of People Affected by Mortgage Barcelona in what could be a week of its tireless activity. Departing from the concrete and the everyday, the documentary tries to explain the complexity and diversity of a movement that has spread throughout the state and has been a real challenge for civil society to government policies and financial institutions after the economic and human disaster which marked the bursting of the housing bubble.

Together we have made more than 40 videos for PAH, both « guerrilla » (document actions, escraches [home and workplace interventions], evictions, press conferences or demonstrations) and « campaign ». With this documentary we collect and share some of our experiences, to bring to the public a view of the movement hardly found in the media: from the inside out.