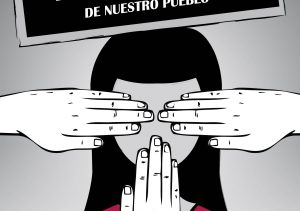 Marea Granate (Maroon Wave, a collective of outraged Spanish migrants abroad) hereby denounces the authoritarian and antidemocratic drift of the Spanish State. There are political prisoners in the country, which is not something new. In fact, the anti-terrorist law has been used for years now as a tool to justify detentions, political prosecution and even tortures. The so-called “Gag Law” has been clearly used for repressing those who raise their voices against the neoliberal and conservative policies of the government as well as against the self-determination process in Catalunya.

We are worried about certain attitudes the current Spanish regime is showing lately, giving the impression that an under-cover Francoist regime is still in power. What is supposed to be a European democracy is in fact very far from being a real one. There is a shamefully large amount of people suffering the consequences nowadays: “The Jordis”, Emilio Cao, Alsasua´s bar fight suspects, Valtonyc, Pablo Hásel and La Insurgencia (rappers), comedians, puppeteers and pro-human rights activists. These cases only emphasize a reality that is consubstantial to the post-Francoist Spanish regime: the shock doctrine launched with the so called crisis punishes all kind of political dissidence. Their agenda is to impose a political and social monopolized narrative, a one-way speech so the status quo is never questioned.

In this frame, several rights and freedoms are being stepped over. We denounce the breaches of international agreements by the Spanish State regarding the existence of political prisoners and the fundamental rights of association* and freedom of speech*. We denounce the enormous impunity, the growing power abuse and lack of justice in our country.

We also condemn the arbitrariness with which the Spanish State uses the law as a weapon in their ideological war, as well as the indiscriminate usage of criminal types such as terrorism, exaltation, obloquy, blasphemy or attack against the authority, banalizing them to prosecute the citizenship.

We have witnessed how the Spanish State imprisons people for actions such as: participating in a demonstration, writing a tweet, belonging to a social collective, involvement in a bar fight, song writing, development of theatre plays, provide information during a demonstration, participation in a general strike or willingness to use their right to vote.

In opposition to social justice, this actions only promote the substitution of political action for a hyper-punitive usage of the penal code with the sole intention of making the repression with which the State responds to those who hold a different ideology, seem unavoidable. So that, belonging to social collectives, protesting and the legitimate opposition against the status quo are deemed targets for prosecution and police repression, therefore denying the citizenship their right to protests and, as a result, taking us further from a democratically-focused behaviour of the State.

For these reasons, Marea Granate demands from the government to stop all the ongoing judicial processes against people whose only crime is to exercise their rights, the immediate releasing of all those unfairly imprisoned due to political reasons, to guarantee the rights of association and freedom of speech. All of this while opening a dialogue to protect the right to defend our diverse political positions.

We call upon the derogation of the wrongly-called “Organic Law of citizenship protection from 2015”, popularly known as “Gag Law”, as well as the suppression of the following penal types: insults to the crown**, offense against religious feelings*** and a audit of the penal code reform, approved with the votes of PP, PSOE, Coalicion Canaria, UPN and Foro Asturias (and the abstention of CIU and UPyD) that allowed the stretch of the definition of “terrorism” to actions that have nothing to do with it.

We claim for a reform of Spanish justice, to guarantee its independence from political power while ensuring respect for international agreements regarding human rights and freedom of speech.

From abroad, we will keep spreading and supporting social mobilizations in favour of social justice, denouncing the excesses committed by the so called “law enforcement” and the State´s repressive apparatus, uncovering fake news cooked in the sewers of the State, counteracting the disinformation spread by the media cavern and making visible the citizenship resistance initiatives.

Citizenship participation in political affairs is a value that every State that considers itself democratic should not only not repress but also actively promote.

We used to be asleep but we’ve been awake a while already.

View all contributions by Marea Granate