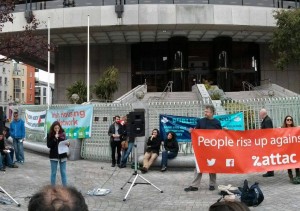 MANIFEST AGAINST THE TTIP

We are Marea Granate, a transnational, non-partisan movement formed by emigrants from the Spanish State and supporters, which aims to combat the causes of the social and economic crisis that have forced us to emigrate.

We are immigrants, and many of us did not want to be so. We did not want to leave our family, our communities, but we were forced to do so because of the consequences of ominous policies. Our current situation as immigrants is the result of both the implementation of severe economic policies and the increase of the social injustice in Spain, just like in other European countries (especially PIIGS). Corruption, encouraged by an unscrupulous system, both nationally and globally, stole our space as well as our non-existent democracy, our voice. A greedy minority makes the decisions that we should be making, for their own and exclusive benefit.

We, along with other activists in Dublin, support all the European peoples’ initiatives against the Europe of the capital that are taking place these days. We would like to mention especially the EuroMarches, the initiative of the people that have marched from Gibraltar to Brussels from the 1st of October, and from other parts of Europe as well. They are activists from many grassroots social movements and organisations, ordinary people that have said «enough is enough». People who are today in Brussels to say that we can build another Europe, to call on Europe’s citizens to mobilise for a civic rebellion against the dictatorship of the banking sector and the multinational companies. They are following the example of The Marches of Dignity that took place in Spain in 2014, when many tens of thousands of people got organised and arrived in Madrid from all over the Spanish State in six columns demanding basic rights as work, food and housing. We would like to highlight that 30 innocent activiSts from the Euromarches were arrested on Thursday when they arrived in Brussels. This is the Europe that we have.

We totally reject the trade treaties that are being negotiated behind closed doors: TTIP, TiSA and CETA. These treaties, as our comrades have explained before, are free-trade agreements between the US and the EU, or Canada and the EU, which will allow multinationals to operate beyond the control of democratic institutions. These treaties mean the destruction of every single barrier to free market, every social protection regulation, each and every labour law that protects workers.

TTIP, TISA and CETA will not only deeply attack democracy or the environment, but also employment, labour rights and working conditions. They are going to make our working conditions worse, and they are pretty bad already as a consequence of neoliberal policies. Working conditions in the EU are going to be aligned with those in the US, where labour standards are lower and trade union rights are fewer. The US, for instance, has not ratify most of the International Labour Organisation (ILO) treaties. That means total flexibility for employers and job insecurity for the employees, lower wages, privatisation of public services etc. Also, the increase of competition between companies in both sides of the Atlantic will mean that hundreds of thousands of jobs will be destroyed. A study from the University of Tufts, in Masachussets, estimated that over 600,000 jobs could disappear in the EU. It happened before with other trade agreements such as NAFTA (signed by US, Canada and Mexico), which caused the loss of one million US jobs over 12 years, instead of the hundreds of thousands of extra that were promised.

The only way to stop it is people’s mobilization. People must know about these treaties, must understand how they will affect their lives and must get organised to fight them. Many of us are doing so already, but we need many more. There are already over 3 million signatures against TTIP, a huge number, and although only 1 million signatures are required for a popular legislative initiative, the European Commission has ignored it. It´s good news that a number of cities and towns in Europe have declared themselves as being a TTIP Free Zone, such as Glasgow or Barcelona, recently. We need a huge international grassroots movement of people to overwhelm their expectations. We need to create networks with all the different groups fighting for change, everywhere, and challenge the institutions in our countries and the European institutions.

For the unity of European citizens against the Europe of capital, and for a democratic, social, sustainable and caring Europe of the people.

BASTA! OXI, ENOUGH! We are building another Europe.